Wishing a happy and healthy new year to all readers.

New Years eve and two drunks at Clapham Junction station had wandered off the platform and were staggering along between the railway tracks. One of them said, “This ish the longest shtairway I have ever been on.” The other replied, “It’sh not the shtairs that bovver me, it’s the low balushter rail….”

EXHIBITIONS & LECTURES We have had an exhibition stand at several model railway exhibitions recently and are due at the Glasgow Model Railway Exhibition in February and the London Show at Alexandra Palace in March as well as at Stoneleigh. As I mentioned in the last blog, Marie and myself are keen to explore other avenues this coming year to introduce the genre of railway carriage prints, posters and commercial art to a wider audience, including the fine art market.

In November I travelled up to the N.R.M. to hear a lecture on their carriage panel collection by a university student, with a couple of other talks on railway subjects by speakers arranged by head curator, Ed Bartholemew. Mike Priestley was there [thanks for the interesting recent article in RAG on modern BR posters, Mike] and I was encouraged by the attendance and the evident interest shown, as well as how many people I talked to afterwards who were unaware of the subject or the ‘Landscapes’ book – now 8 years out of print. It all helped to give me the kick up the backside I needed to get moving and produce the 3rd edition next year!

VIDEO & BOOKS
Prices of rarer carriage prints have held up reasonably well in the past year, but, as auction reviews show, post-war prints struggle – most railway collectors have the particular ones they are after. However, it does make it a great time to fill in any gaps or to collect new areas. As I mentioned, we are keen to introduce new collectors into the marketplace and new books and a video are planned. I’m hoping to do some filming this spring with Nick Crane, the TV presenter on a short video on the subject of carriage prints and commercial artists. Having a professional video maker as a son helps me of course! Nick has recently been appointed President of the Royal Geographical Society and is a busy man but hopes to be involved.

ORIGINAL ARTWORK
Having purchased quite a few original artworks for carriage prints in the past year, I have finally got round to scanning and examining my collection of paintings. Some interesting observations came from this. Red Hill Tunnels, Trent by Kenneth Steel has the title in capitals ‘Watford Tunnels’ on the cover of the artwork! (It looks like the artist’s writing, but I can’t be sure). The watercolour of Crafnant Valley, Caernarvonshire by Charles Knight solved a long-standing puzzle: I have always thought that this was a composition of several views by the artist and, despite a couple of expeditions to the end of the valley, have never been able to see any view comparable. In pencil on the back of the painting I found the words “Crafnant Valley from Trefriw” and, lo & behold, looking at the great blessing that is now ours through Google Images, saw the same landscape from the exact viewpoint, showing Klondyke Mill, visible in the painting. Google Images/ Earth is so helpful in research – indeed, you wonder how on earth people managed without the facility of the internet in days gone by. I actually purchased this painting a couple of years ago from a friendly man in Holland near the German border who had contacted me via the internet. I never did find out how it had ended up there.

The painting of The Groves at River Dee, Chester by Reg Lander solved the reason why the artist hadn’t appeared to have signed his artwork on the smaller 20 x 10 prints – he had, but the printer’s crop marks left his signature outside the print area! The identity of the artist responsible for Penrhyn Castle and the Lledr Valley, nr Bettws-Y-Coed still remains a mystery – nothing on the artwork for the latter to give a clue. The Penrhyn artwork was sold in a railway auction years ago – a bit of a long shot – but does the owner know of any clues on the artwork as to which artist was involved on this painting? One other surprise was finding two different paintings of John Peel, the Fox Hunter by Bill Sawyer from the LMR Historical series in the collection! One must have been rejected for an unknown reason – possibly the wrong uniforms shown on the huntsmen? 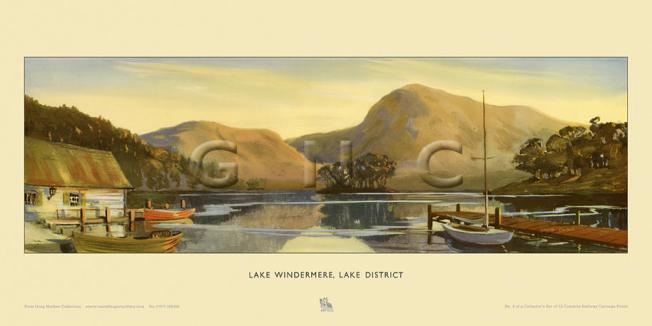 LAKE DISTRICT PRINTS
Twixt Christmas and the New Year, we spent a few days in the post-flooded, but still sodden, Lake District at Keswick. It was great to see the old station and canopy standing and used – the last time I was there was just after the line had closed). We had just got past Glenridding on the way out before the road flooded again. Both the exact locations for the carriage print locations of Coniston Water (Frank Sherwin) and Lake Windermere (David Cobb) proved very difficult to identify and photograph. Having driven completely around Coniston Water and slipped up to my ankles into a furrow of liquid mud after a walk, I wasn’t too keen to explore too wide an area but we got some idea of the landscape. I suspect that the view is from the south eastern side of the lake near Crake Valley looking across to High Nibthwaite and the Water Park buildings. Definitely, needs another visit unless anyone can confirm?

The Lake Windermere painting is either a fabrication by Cobb or a view of another lake (there is nothing written on the original painting to suggest either). The closest alternative I can see would be from the south east part of Grasmere looking northwards towards Fairfield Peak. Any wisdom from readers would be appreciated. Thankfully, the other central Lake District views are rather more straightforward.

ARTISTS
Always good to find out more information on the poster and print artists – someone emailed me with comprehensive details of the poster artist, Kerry Lee, renowned for his detailed artworks for city map posters. Richard Furness’s excellent research into poster artists, combined with my earlier research on the carriage print artists has produced a very useful database of commercial artists – an area with surprisingly little available information to hand, even on the internet.

THE GREG NORDEN COLLECTION
Ebay occasionally turns up a gem and last month produced a lovely panel with gilt edged mount with triple photographs from the Metropolitan Railway with ornate scripted title at the top. The first of its kind I had seen. I was delighted to get it close to my initial bid, despite completely forgetting to leave a higher bid in case of later competition!

I’ve set a target to finally get round to sorting the advertisements, maps and diagrams in the collection this year. Should be interesting! All the images of the carriage prints and photograph panels are on display online, now at larger sizes with larger maps to view, too. For example there are over 350 LMS sepia panels (with another 50 on the way) and over 2,500 photo panels overall – as well as all the carriage prints – a useful database of information, so do browse the www.travellingartgallery.com website – no cost involved!.