Since the incomplete list of railway carriage prints shown in the last edition of my book Landscapes under the Luggage Rack, I’ve been asked many times by collectors to issue the complete and definitive list of carriage prints produced from artwork by leading 20th Century artists, which my researches have now made possible. I thought this would be a good time to publish this and generate a little more interest in the subject for current and future collectors – a sort of ‘Ian Allan ABC Train Spotters Combined’ but for carriage prints! Quite appropriate really, as my first job for BR at Waterloo HQ in 1971 was doing the same post Ian Allan, who published these famous books, had vacated some years before! My only other claim to fame is being a relative of Charlie Chaplin – my granddad’s mum and Charlie’s mum were sisters and my granddad knocked about with him in South London as kids before Charlie went to the States. All the male members of the family (including muggins) have Spencer as our middle name. Probably the reason I walk funny – all in the D.N.A. And – yes – I do know what the initials ‘D.N.A.’ stand for: National Dyslexics’ Association. Anyway, I’m waffling…

The previous listing I made back then was by series according to company. This time I have sorted all the prints into individual counties in alphabetical order giving the artist and also a code specifying the issuing company, date of issue, size of print and whether mounted. The initial code I use for each print (i.e. L001) is purely a reference to the image which is viewable on the website www.travellingartgallery.com

For further interest I have now also added known artworks produced for, but, [for whatever reason], never issued by the railways as carriage prints. Again, these un-used artwork images are viewable on the website. I have been fortunate enough to acquire more of the Western Region artwork examples, especially some of Gyrth Russell’s paintings of Cornwall. It baffles me as to why they didn’t produce one or two of them in the WR Series as they would have been worthy additions. As mentioned in my book, the Western Region seemed loathe to follow an LNER idea and dragged their feet producing artists’ carriage prints. Here I show artworks of Mevagissey and Polperro, Cornwall by Gyrth Russell and South Shields by Edgar Thomas Holding…

RAILWAY CARRIAGE PRINTS MASTER. This is the definitive list of carriage prints in PDF format.

Whilst on the subject of un-used artwork, it’s surprising what sometimes turns up when taking a closer look at items in the collection. Going through the original artwork for the LMR Historical series recently, I noticed that Bill Sawyer had produced two separate artworks for the John Peel, Fox Hunter carriage print…   . The artwork for the un-issued print is shown here 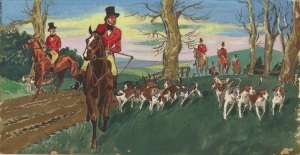 with the issued example – 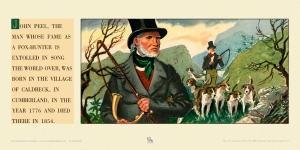 perhaps the uniforms were found to be wrong on the first one – who knows? Anyway, to save years of wasted effort by collectors – don’t go looking for original prints of this, or any of those I have listed with a grey surround – there aren’t any!

In the past year I was delighted to have finally collected and sorted all the early GWR Series of 15 Cornwall carriage prints issued in 1923 by the Great Western Railway. These were issued in collaboration with the Cornishman Group of Newspapers and the images of the artworks also illustrated the GWR Cornish Riviera book. The artist was Claude Montague Hart (1869-1952). He was a painter of landscapes & seascapes. One of seven artistic children of painter, Thomas HART. Claude was born at the Lizard in 1869, Landwednack, Cornwall, and died 6 Nov 1952. ‘Monty’ studied painting in Antwerp but returned to the Lizard which provided the subjects for many of his seascapes. Many paintings were sold locally to visitors, but by 1940s demand had dropped and he ceased painting. He was deeply involved with the Lifeboat Service, and for thirty-nine years was Secretary for the local Lizard rescue boat. The carriage prints were small and narrow on card with large grey titled mounts 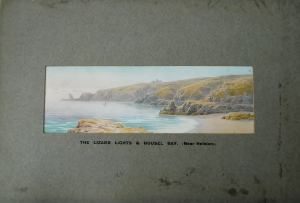 and have been only occasionally seen on stalls and in auctions. I first noticed a few of them when I first went through the NRM collection and have been tracking them down since. Does anybody know which stock they appeared in or which routes? – they certainly were displayed outside the west country and probably in main line stock. Detail of one of the images can be seen here…

With the very kind help of visits by the Kilvington family, we have now catalogued all the pre-grouping, grouping, BR & LT carriage adverts, notices, maps and diagrams in the collection and this past month has finally seen the completion of sorting and cataloguing all the photographic carriage panels dating from the 1880s through to the end of the grouping period when they finished producing them. Sounds daft, but this is the very first time many of these panels have been properly examined by myself and the data and measurements obtained has given me a far greater understanding of what formats many of the railways used in displaying them. I’m sure some interesting articles on specific companies with illustrations could follow at a later date.

One last random question to throw out to you before finishing, relates to the commonly seen print River Wharfe near Ilkley, Yorkshire by Gyrth Russell. 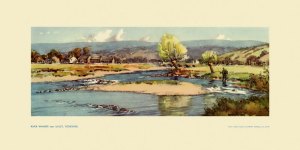 We originally thought this was an amalgamation of views along the river around Addingham. A café owner there told me it was definitely a view of Burnsall Bridge further up the river and the bridge with its 5 arches certainly fits the bill although, having been there to photograph it, the artists viewpoint for the painting seems impossible to find! A correspondent has recently told me the location is Bolton Bridge further downstream, but this bridge only has 3 arches, so I’m none the wiser or convinced! Any reader’s clarification will be gratefully received!